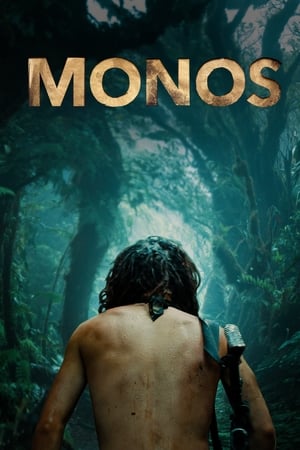 On a faraway mountaintop, eight kids with guns watch over a hostage and a conscripted milk cow.

>_The idea comes from, in many ways, the country where I'm from, Colombia, a country that's experienced 60 years of civil war. And it's been going on for so long, and there are so many different factions and sides, and there's peace agreements and they break, so, in a way, it wasn't something you could go at with clear ideological premises, but instead something that had a kind of ghostly feel. That's what inspired the story, to try to break any binary notion of future/past, man/woman, paradise/hell, and try to get_ _at something that you feel through the stomach or through the skin. I think that's what cinema has; it appeals to your conscious, like a story does, but also your subconscious, kind of like dreams do. So the idea was to do this politically sensitive allegory, but like a dream._

Joseph Conrad's _Heart of Darkness_ (1899) and William Golding's _Lord of the Flies_ (1954) by way of the mad folly of Werner Herzog's _Aguirre, der Zorn Gottes_ (1972) and Francis Ford Coppola's _Apocalypse Now_ (1979) and the children-are-screwed nihilism of Héctor Babenco's _Pixote: a Lei do Mais Fraco_ (1981) and Jean-Stéphane Sauvaire's _Johnny Mad Dog_ (2011), garnished with the soul-shattering futility-of-war mentality of Elem Klimov's _Idi i smotri_ (1985), all wrapped up in a pseudo-fairy tale/fantasy aesthetic. Turns out an insane hodgepodge like that results in a completely unique film, quite unlike anything you're ever likely to have seen. Written by Alejandro Landes and Alexis dos Santos, and directed by Landes, Monos (from the Ancient Greek "_μόνος_" ("_mónos_"), meaning "alone") is an uncategorisable film that moves from a mountain top which is literally above the cloud-line to a stifling jungle to a raging river to the edge of a city in the midst of war, whilst thematically travelling all the way from a tight-knit group of soldiers who would die for one another to a last-man standing mentality bordering on insanity. Visually stunning, the plot is a little lacking, and sometimes the allegorical basis is a tad imprecise, but this is hugely ambitious and audacious filmmaking from a director we're going to be hearing a lot about in the coming years.

In an unidentified country (the characters are speaking Spanish, meaning we're somewhere in Latin America, with the filming done in Colombia) at an unidentified point in time, a war is raging between unidentified combatants for never-specified reasons. On a mountaintop, we're introduced to the MONOS unit, a small group of child soldiers known only by their _noms de guerre_ – Wolf (Julian Giraldo), Rambo (Sofia Buenaventura), Bigfoot (Moisés Arias), Swede (Laura Castrillón), Smurf (Deiby Rueda), Dog (Paul Cubides), Boom-Boom (Sneider Castro), and Lady (Karen Quintero). Apart from being drilled by "Messenger" (former real-life Colombian guerrilla fighter Wilson Salazar), a superior officer in what is referred to only as "The Organisation", the children have two tasks – to look after a conscripted milk-cow named Shakira and to guard an American prisoner being held for ransom, referred to as Doctora (Julianne Nicholson). By day, they take their duties very seriously, but by night, they act more like the teenagers they are; drinking, eating mushrooms, having sex, goofing around. A tight-knit group, morale is high. That is until an accident has a series of knock-on effects that ultimately sees them abandon their mountain base, heading into the unforgiving jungle far below. Cut off from their chain of command, their discipline starts to break down and soon, they have come into violent conflict with one another.

The film is very loosely inspired by the Colombian Conflict, a low-intensity, multi-sided civil war that began in 1964 and is still going on today. The majority of fighting has been between the government, paramilitary groups, narcos, foreign actors, and guerrilla organisations, the best known of which is _Fuerzas Armadas Revolucionarias de Colombia_ (FARC). In particular, Landes and dos Santos based the events of the film on the 2016 peace agreement signed by Juan Manuel Santos's government and FARC, which called for FARC members to surrender their weaponry to UN forces, at which point they would be reintegrated into Colombian society. FARC officially ceased to exist as a military group in 2017, instead reconstituting as a political party, _Fuerza Alternativa Revolucionaria del Común_. However, around 1,600 FARC dissidents refused to lay down arms, forming independent splinter groups to continue fighting the war. According to Landes,

>_the fragile possibility of peace is in the air, and it's been a long time coming._ Monos _explores this moment through the prism of the war movie. Though this is my generation's first chance, this is not Colombia's first peace process and so it feels plagued by ghosts. These ghosts inspired me to shape the film like a fever dream._

One of the most important aspects of the film is the lack of political, historical, societal, and militaristic specificity – it could be an allegory for almost any conflict at any point in time, with Landes explaining,

>_the idea, from the story to the production design, was to create an atemporal world, out of place, out of time, far away from everything – with this group of kids who is being trained and watched over by some unknown force. They're on a mission, part of a clandestine army. They're a squad of soldiers in the 'back' lines of a war – but also just a tight-knit pack of teenagers. Though the specifics of the Colombian civil war are the source of inspiration, the idea was always for the experience of the film to cross borders and exist as a world in and of its own._

In this sense, it has both a fairy-tale sensibility and a mythological underpinning, with the violence and brutality offset by a poetic tone that speaks to timelessness. Rather than attempting to elicit pathos by evoking the horrors of a particular conflict, Landes treats the story as a universal allegory, facilitated by the lack of concrete contextualisation.
On top of this, the film examines the chaos and absurdity of war through the lens of adolescence; although the members of MONOS can be violent, so too are they teenagers, a duality that informs the entire film. The opening scene, for example, depicts the group playing football, but wearing blindfolds, thus encapsulating both the seriousness with which they regard their training, but also acknowledging that play is still an important part of their lives. Indeed, the film could even be interpreted as an (admittedly extreme) allegory for adolescence itself (as opposed to adolescence being an allegory for something else) – a group of teenagers unsure who they are, experimenting with drugs, alcohol, and sexuality, not entirely thrilled about being told what to do by adults, and convinced that they can do a better job of running things.

Monos's most salient aesthetic characteristic is its dream-like quality, walking a very fine line between the gritty realism of a war drama and the hallucinatory feel of a fever-dream (in this, it very much recalls _Apocalypse Now_). This sense of existing just slightly outside reality is aided in no small part by the discordant and dislocating score by Mica Levi (_Under the Skin_; _Jackie_; _Marjorie Prime_), which is built around whistling and timpani percussion. Also important here is the lush and saturated photography by Jasper Wolf. On the mountain, Wolf often shoots scenes with the characters dwarfed in a small corner of the frame, filling almost the entire screen with vegetation and sky. Such compositions suggest life lived at the edge of the world, existing outside society, existing outside even time. However, once we relocate to the jungle, Wolf goes in the opposite direction, shooting in tight close-ups, frequently handheld, suggesting both claustrophobia and the loss of the near-omniscient control seen earlier in the film.

If I were to criticise anything, it would be the plot, which is very slight, even by allegory standards. Indeed, regarding that allegory, although I certainly admire Landes's steadfast resistance to specificity, sometimes he's almost _too_ successful in rendering the non-specific and universal, leaving you wondering what exactly he is trying to allegorise (even the title can't be locked into a single meaning – apart from the Greek word for "alone" and the name of the unit itself, it's also the Spanish term for "monkey"). And although the theme of child soldiers is a weighty enough issue on its own, it's something with which Landes seems uninterested for its own sake. This can lead to a lack of emotion, which is almost certainly by design, but it makes it difficult to feel empathy for any of the characters, even Doctora.

Nevertheless, this is hugely ambitious cinema with a lot on its mind. Straddling the line between the surreal and the barbaric, realism and fantasy, the seriousness of the adult world and the innocence of childhood, it's a singularly unique viewing experience, as beautiful, lyrical, and abstract in some places as it is ugly, crude, and realistic in others. Both a dire prediction for where an increasingly divided world may be heading and a foundation myth, _Monos_ speaks as much to our future as it does to the legends underpinning our present.